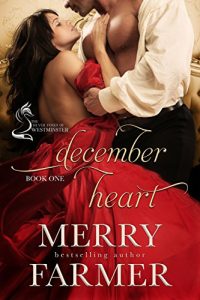 At twenty-seven years old, Mariah Travers has become what she most feared—a spinster and a perpetual adolescent in the eyes of her family and the law. But her fortunes change when her father announces that he has promised her hand in marriage to an old friend and colleague in the House of Lords. Lord Peter deVere, Earl of Dunsford, is not at all who Mariah imagined marrying, but she is willing to take a chance on the older man in order to gain the freedom that only married women are allowed.

After a tragic marriage that stretched on for two decades, Peter is hesitant to marry again. But he needs an heir, or else his dastardly nephew, Lord William, will inherit everything he’s worked his entire life to build. But when he meets Mariah, sparks fly that neither of them expected. Their unlikely match stands a chance of giving each of them all the things they never realized they needed.

But trouble abounds when the mine that has provided Peter with his fortune is exhausted and the search for new veins of copper begins. On top of that, Lord William isn’t about to stand by and watch his inheritance disappear. His efforts to drive a wedge between Peter and Mariah cause havoc and heartbreak at Starcross Castle, which will take an act of heroic devotion to overcome as Peter sets out to prove that true love is ageless.

The Author / Publisher advised that this title was available for $FREE (or local equivalent), discounted from $3.99 on 4/22/2018 at the following retailers. These links may use our affiliate tag with Amazon and other retailers and as such may earn us commissions on qualifying purchases.