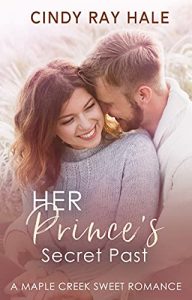 What happens when he falls for someone who doesn’t know his true identity?

Prince Edward of Mastonia, heir to the throne, is forced to go into hiding when his brother plots against his life. An avid painter, he tracks down a master artist he longs to study under in the small town of Maple Creek, Virginia. It’s the perfect hiding spot. What he doesn’t expect are the feelings he’s developed for the artist’s beautiful daughter. Only she doesn’t know he’s a prince. He’s afraid she’ll decide she only wants him for his title like his ex-girlfriend did.

Art museum director Carrington Dalton desperately needs to raise money before being forced to close the doors on her father’s beloved art museum. Only her father hates asking for money. He’s been so resistant to it, the museum has suffered. When a mysterious, handsome foreigner shows up on her family’s doorstep, insisting he wants to train under father to become a master painter, Carrington decides to swallow her pride and ask for help. As they work together, she begins to fall for him. But Carrington isn’t sure a man like Edward could actually want to be with her. She’s been burned in the past.

Can they overcome their fears and be together, or will they let their stubborn hearts rule the day?

If you enjoy sweet romance set in a small town with swoony moments, then you’ll love this book!

The Author / Publisher advised that this title was available for $0.99 (or local equivalent), discounted from $2.99 on 1/28/2022 at the following retailers. These links may use our affiliate tag with Amazon and other retailers and as such may earn us commissions on qualifying purchases.