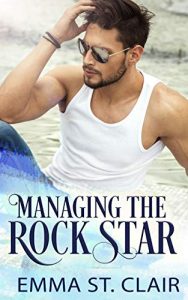 Reese Montgomery is a sought-after social media strategist, but fixing the PR mess of her teenage crush, rock star Sterling James might be too much. After a terrible first impression, her job is under threat and Reese needs to be a complete professional. Even when her feelings are anything BUT.

Rock star Sterling James is at a turning point in his career, but his negative image may hold him back. Hiring a social media strategist won't change his emotional family crisis, but can hopefully help him put on a better public face. But he has little faith in Reese, at least at first. As she continues to prove herself, Sterling has another problem: he is falling hard for the sweet, scheming woman sharing his tour bus.

When his family problems come to a head at the same time as a PR nightmare, both Reese and Sterling will have a crisis of faith and a choice to make: career or love?

This is a clean Christian romance and was formerly titled “The Rock Star's Scheming Bride.”

The Author / Publisher advised that this title was available for $0.99 (or local equivalent), discounted from $3.99 on 2/19/2019 at the following retailers. These links may use our affiliate tag with Amazon and other retailers and as such may earn us commissions on qualifying purchases.