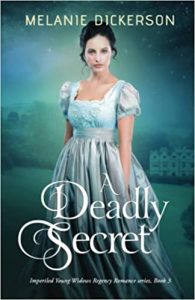 Lillian Courtney’shusband’s criticizing and bullying ways culminate with him physically striking her, and she runs away to the Isle of Wight, taking her young daughter with her. Her husband follows her there—and is found dead the next day. Her mother-in-law accuses her of killing her husband, then tries to take her child away from her. Lillian is devastated at the prospect of losing her daughter.

Nash Golding, Earl of Barrentine, was not looking for trouble. He was only trying to keep his secret safe—the secret that he is a novelist publishing amusing satires under the pen name Perceval Hastings. His family would be aghast if his secret were made public. As an earl and a member of the House of Lords, working as an author of satirical novels is beneath him. Early one morning, after sending his latest manuscript to his publisher, he emerges from a tiny village post office to witness a man, obviously up to no good, stalking a young lady. Nash follows them and is forced to be of service to the lady—in saving her life.

Nash strives to keep the pretty widow safe from her late husband’s devious family members, who wish to gain control of her daughter. But while he is protecting them, will his own secret be revealed? His position in society and in Parliament will be irreparably damaged when it is discovered that, not only is he the notorious satirist, Perceval Hastings, but he is also harboring a poor widow suspected of murdering her husband.

Lillian is falling in love with the handsome earl, despite her fear and lack of trust. Nash, in turn, finds that neither his reputation nor his heart is safe when the lovely Lillian is near.

The Author / Publisher advised that this title was available for $0.99 (or local equivalent), discounted from $4.99 on 6/3/2022 at the following retailers. These links may use our affiliate tag with Amazon and other retailers and as such may earn us commissions on qualifying purchases.