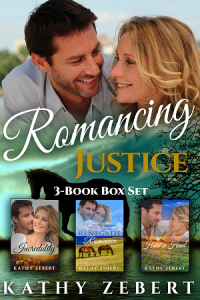 When a beautiful, self-confident stenographer meets a romantic Texas rancher, an adventure like no other begins. A second-chance, clean romance mixed with murder, espionage, and legal corruption… it's all here in this three-book series.

Incredulity (Book 1)
A romantic cowboy, A sunset kiss. Everything is perfect until he's charged with murder.

Callie Fletcher just wanted to sit on the terrace of her favorite hot spot and watch the sunset over the Texas Hill Country. A table for one, a glass of pinot and the best view in Austin. When Dominic Jaxson, a tall, handsome cowboy, charms her into sharing the view, the sunset gets just a little more magical. To her delight, Dom wants another evening with her. Soon.

A few dozen sunsets later and Callie is enamored with the gallant rancher. And he with her.

Their affection blooms into more and Callie dreams of a future together. Never does she imagine that the caring and tender man might hide a secret. Or that he might be a criminal. But then he walks through the doors of her courtroom and is charged with a crime.

As a court reporter, Callie knows her way around the legal system. And she’s certain Dom isn’t a criminal. Can she uncover the clues to prove his innocence? Or have she and her handsome cowboy shared their last Texas sunset?

Renegade Romance (Book 2)
In this sequel to “Incredulity,” the budding romance between Callie and her very romantic cowboy, Dom, continues to flourish. The relationship, however, takes a hiatus as Callie accepts an undercover assignment from the FBI, requiring her to temporarily leave her Austin courtroom for a federal courtroom in San Juan, Puerto Rico. She risks everything to get to the truth of allegations of unspeakable corruption of a federal judge, lodged by his court reporter, Mercedes.

Callie's new undercover role brings friends in new places, as well as enemies. Who will be there to help when things go terribly wrong?

Hand in Hand (Book 3)
Emily knows she's being watched. Being locked away like a precious toy is all she knows, but when faded memories start to surface, she decides to take matters into her own hands and find the truth. Unfortunately, her husband tracks her every move… and she doesn't know what, or who, to trust.

Enter Callie and Dom. After recovering from a close call with a human trafficking ring, they step back in to help a new friend find his abducted daughter. But even if they find Emily, she may not let them help.

The search leads the couple to places they never expected—in both their mission and their romance. Can they work past the tension between them to bring Emily back home, or will distrust pull them all apart?

The Author / Publisher advised that this title was available for $0.99 (or local equivalent), discounted from $7.99 on 5/18/2019 at the following retailers. These links may use our affiliate tag with Amazon and other retailers and as such may earn us commissions on qualifying purchases.