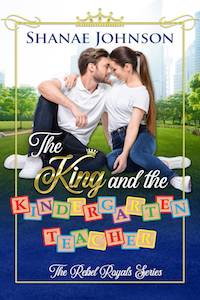 He’s the king of his domain. She’s the queen of nap time. Can they learn to rule with their hearts?

Esmeralda Pickett reigns over the subjects in her kindergarten class. She’s probably the last adult who still believes in fairy tales because all the stories do for her young charges is put the kids to sleep. Esme dreams of being swept off her feet by a charming prince, so when she’s saved from the dangers of texting while walking by a real live king, she’s certain her storybook romance is set to begin. Though sparks fly between the king and the kindergarten teacher, the pages get stuck when Esme learns that the monarch can only marry a woman of royal blood. And while she’s a true blue New Yorker, her blood is as red as it comes.

King Leonidas’s first wife was selected for him at birth. Now a widower, Leo has the right to choose his second wife, but it won’t be the love match he’s secretly dreamed of making. The small country of Cordoba is facing an economic crisis, and marrying a rich duchess would secure his people’s future. But can his heart afford another loveless marriage?

As Esme and Leo get to know one another, it’s clear there’s a thing between them. But another thing— her lack of royal blood—is keeping them apart. As the clock ticks closer to midnight, will Esme get her storybook ending? Or will this fairytale turn grim?

Find out if love will reign in this light-hearted, sweet romance of royal engagements. The King and the Kindergarten Teacher is the first in a series of royal romances that are beyond the common tale!

The Author / Publisher advised that this title was available for $0.99 (or local equivalent), discounted from $2.99 on 3/19/2019 at the following retailers. These links may use our affiliate tag with Amazon and other retailers and as such may earn us commissions on qualifying purchases.