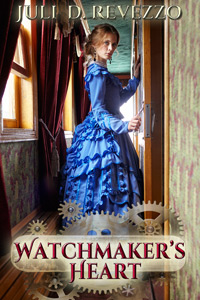 For Miss Phoebe Lockswell, fashionable London tea parties and balls aren’t her style. Instead, she prefers to tinker tirelessly with a clockwork diffuser she’s built from scratch. If only she can get the invention to work on command, she might earn her way out of an arranged marriage to a repugnant member of the House of Commons.

London watchmaker Mortimer Kidd was brought up hard in the arms of an infamous London gang. Despite the respectability he strives for now, the gang leader is blackmailing him. When Mortimer sees Phoebe’s diffuser, he thinks he’s found a way to buy himself out of trouble. The brash Phoebe manages to steal his heart, however, before he can purloin her invention.

Will Mortimer’s unsavory past catch up to him before he convinces Phoebe of his devotion? Worse, once Phoebe learns the truth, will she ever trust him again?

The Author / Publisher advised that this title was available for $0.99 (or local equivalent), discounted from $2.99 on 2/18/2019 at the following retailers. These links may use our affiliate tag with Amazon and other retailers and as such may earn us commissions on qualifying purchases.